A pair of Buzzards were circling over the Italian Garden, quite high up but Russell Ritchin managed to get a good picture of one of them. 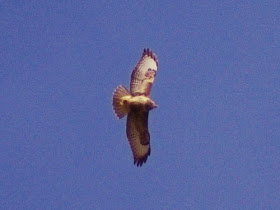 He and Paul Turner had also heard a Hobby. It seems that at least one of the Hobbies that were in the park last summer has not migrated to Africa as Hobbies are supposed to do, and has been hanging around here. There have been several hearings and distant sightings.

The Lesser Black-Backed Gulls I photographed courting on 27 February are, as I suspected, the pigeon-eating gull and his mate. You can say 'his' with reasonable confidence here, as in this species males are larger, and there is a considerable difference in size between the two. Both birds have very bright yellow legs, a sign of good health no doubt due to their nutritious diet of Feral Pigeons. Here, in their usual place near the Dell Restaurant, they amicably share their latest victim, taking alternate bites. It seems odd to see gulls sharing anything. 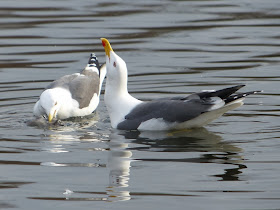 A young Herring Gull was having a drink on the edge of the Serpentine. All birds except pigeons drink by taking a beakful of water and throwing their head back to swallow it; pigeons manage to suck up water somehow, I suppose by doing someting clever with their tongue to make a kind of drinking straw. 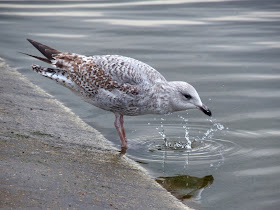 This gull is nearing the end of its first year, and is beginning to get its first adult pale grey feathers. But it will be another two years before it is completely adult in appearance.

There are still plenty of Redwings at the bottom of the Parade Ground near the bandstand. You can hear them chattering in the trees from some distance away. 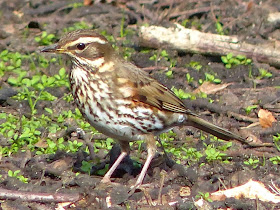 On the Serpentine, a Coot was carrying a thick twig to add to its nest somewhere out of sight. A Coot's nest is instantly recognisable by its large size and solid construction, and they get bigger and bigger because the birds never stop building while the nest is a going concern. 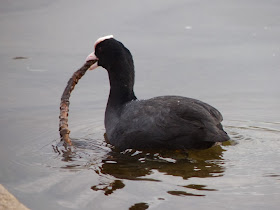 The male Tawny Owl was out on his balcony by 3.30 this afternoon. If we are lucky we shall be seeing owlets in less than a fortnight. 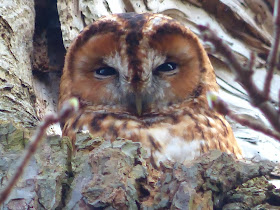